Pokémon and Netflix fans, you are going to love this.

First, I have these easy Pokémon cupcakes for you (or, more likely, your Pokémon-loving kids, but I won’t judge if they’re for you!). And secondly, Netflix is doing something new and super cool for birthdays that your kid are going to love!

I’m a member of the Netflix #StreamTeam, which means I’m a Netflix ambassador and get to share all of my binge watching experiences and television obsessions with you, so you can binge watch, too. Today I’m sharing these Poké Ball cupcakes and information about how Netflix can help make your kiddos birthdays even brighter with their new birthday programming (featuring all of your favorite Netflix characters).

First off, let’s talk about Netflix and their newest programming – it’s Birthdays on Demand programming for kids! Seriously, so fun. Your child’s favorite characters can be cued up to sing a special Happy Birthday song. This is the perfect way to start off your child’s special day!

If you want to take it a step further and include cupcakes in your celebration (because, cupcakes), then I have these super easy Poké Ball cupcakes to share with you. Not only were they simple to make (well, so says my mom, who has legit cake decorating skills and turned my idea into a reality with these beauties), but they’re also really, really cute, and sure to be a kid-favorite. And if you’re going with a Pokemon party, check out my simple Pokemon gift wrap and Pokemon gift ideas for kids – those will add to the fun, too!

If you want to add the cupcake toppers, you’ll also need:

Use any cupcake recipe (we used a red velvet boxed mix that Netflix sent). Make a dozen regular cupcakes (or however many you need), and make a dozen spherical cupcakes, using a mold like this one (that’s the mold I used). 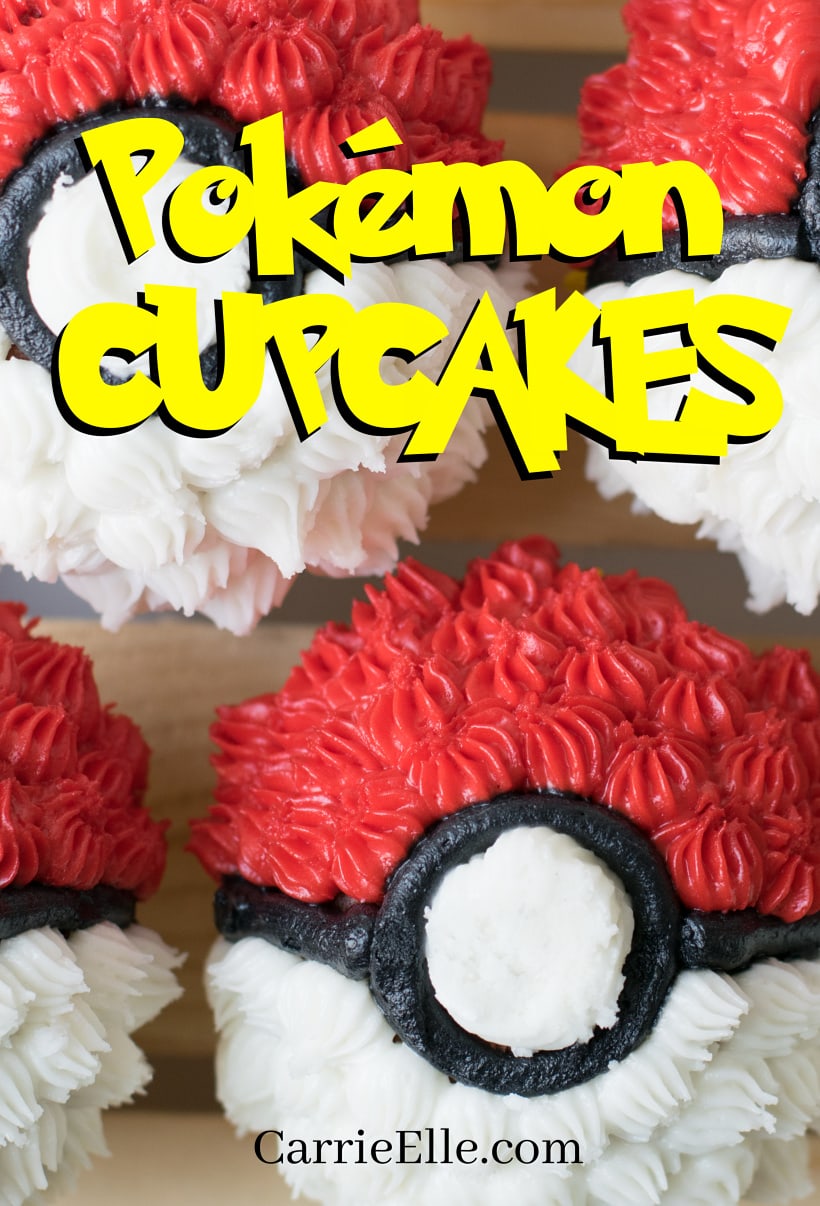 We used a recipe similar to this recipe for the icing (my mom is the OG Cake Boss and she just throws things in a bowl and magic appears, but she tells me that is pretty much the same recipe). Set some aside for the black. Split the rest, and make half of it red. Leave the other half white.

Using the round tip, draw the circle in the center of your cupcake. Add the black lines on each side to make the “belt” (sorry, Pokemon fans, I don’t know the proper word for that black stripe, but I’m sure there is one!).

Fill in the rest of the cupcake with red flowers on one half, and white on the other half. Finish it off with a white icing dollop in the black circle. Ice all the way to the cupcake wrapper – once the icing sets, this will actually help glue the top of the cupcake to the bottom half (I handled these a ton for pictures and the tops never came off until I forcefully removed one so I could eat it).

If you want to add the birthday toppers, download the file below and print on your Avery labels (or card stock, and then cut them out). The labels are handy because you can stick two together on a toothpick and call it a day!

Between these Poke Ball cupcakes of icing-aplenty deliciousness and Netflix singing your kids a Happy Birthday song, you’ve got birthdays officially under control. Now, go eat a cupcake. 🙂

Be sure to join me on Facebook for easy projects, healthy recipes (and the occasional cupcakes, because life’s too short to not have cupcakes) and meal planning and organizing help.

I also think you’ll like the posts below if you’re throwing a Pokemon party! 🙂

This is one of the best site i ever visited ! Thanks admin for providing us so much valuable and informative stuff ! I must Recommend and share this great site with my friends and family members !