A couple of years ago I wrote a post about sleep.  Jack was 11 months old and I was trying to put a positive spin on the whole terrible-sleeper-who-does-not-even-kind-of-come-close-to-sleeping-through-the-night thing.  Of course, when I wrote it there was a little part of me deep inside that thought, “this isn’t going to last forever, I’m sure he’ll be sleeping through the night by the time he’s a two-year-old!”

Well let me just fast forward almost two years from that post and tell you this…the kid still isn’t a “good” sleeper.  His second birthday came and went, and although by that age I was usually able to get a few hours of “me” time after putting him down, I never did get a full night’s sleep.  Up until the day Claire was born, I was up with him at least once a night (granted, most nights he would just climb into bed with me…but there were some real doozies involving growing pains, tummy trouble, etc.).  Charles would help…I was not alone…but it was still trying.
Once Claire was born, I shifted to nighttime newborn duty and Charles took over nighttime toddler duty.  And guess what?
Jack is STILL up at least once a night.  He’ll be three in six weeks.
But I write this not to whine about how “terrible” of a sleeper Jack is…oh, no.  Compared to the early days, one to two waking a night is a piece of cake.
And the baby?  I would not dare complain about her nighttime sleep habits.  She is (no pun intended!) a dream.  Truly.  I mean, she is in bed right now…her own bed…as I write this!  And has been for over two hours!  How could I complain about that?
I would just like to take this time to say this:
Mom, I am sorry I did not nap as a child.  It is my only regret as a baby.  My children are making sure that I pay the price.
That’s right.  My kids won’t nap.
Jack is not even three yet, and he has, for the most part, left his napping days behind.  He gets grumpy, he gets tired, and I feel he still needs his nap…but there’s no telling him that.  If I could make him sleep, I would…but I can’t.  He has fallen asleep a few times late in the evening…once on the wood floors, his pennies (which he calls “coinies”) in hand, and another time in his highchair, half of a chicken nugget in his greasy little palm.  Unfortunately, no nap doesn’t equate to an early bedtime, either.  Tonight he made it up to 10:00 PM (it was movie night, three cheers for Toy Story 2!).
A side note: Charles took over baby duty so I could put Jack down…and OMG is there anything sweeter than your little two-year-old saying “I love you soooooo much mommy, don’t leave!” as you lay in bed next to him?  I think not.
But here’s the thing.  Claire doesn’t want to nap either!
My mom told me that I never napped as a baby.  She would put me in the car and drive around just to get a break because that’s the only time I would sleep. I would sleep for twenty minutes and wake up…wide awake…ready to play.
Claire is twelve weeks old…and she will pretty much only sleep on me, in the Ergo.  She will occasionally sleep in her bed…for twenty minutes at the most.  She will sleep in her swing…again, for twenty minutes.  She rarely nurses to sleep, except for bedtime.  Today, she slept for about 30 minutes in the car on the way to the Arboretum, about 10 minutes on the way home, and about 20 minutes on me as I watched “Up” with Jack.  She then napped another 20 minutes or so right before bath time.
I spend all day feeding/cleaning/entertaining someone (for a few short weeks, I had a blissful break when Jack would nap and Claire would fall asleep on me while I caught up on trashy TV…those days have, sadly, ended).  24/7, I am on duty.
I am not complaining about this.  It could be a lot worse – Jack is an engaging companion, and Claire is a joy.  But I am wondering…WHAT THE HECK DID I DO ALL DAY BEFORE I HAD KIDS??  And why didn’t I, like, save the planet, or end world hunger, or just do something great with all of my free time??
Because you should see what I can do now when I have 20 free minutes…there’s nothing quite like kids who don’t nap to teach you some serious time management skills.
And because I want to remember that Claire does occasionally take a little nap…here is a picture of me and Jack on the couch watching “Up” while Claire sleeps. 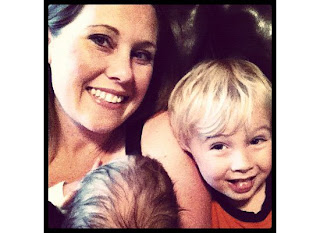 This really did make me smile. 🙂 I only have one kiddo and I wonder often what I did with all my free time. 20 minutes to myself now seems like such a treat!

I know, right?! It’s amazing how much more valuable time is once you have a kid!