We have been training Jack to avoid scorpions since he was eighteen months old.  I am proud (very proud) to say that all of this training seems to be sinking in.  The two main rules of scorpion-avoidance are: DON’T TOUCH and TELL A GROWN-UP.  Sort of like a “Stop, Drop and Roll” for dangerous bugs.

So the other day, Jack comes running up to Charles and telling him that “the scorpion got the spider!”  Charles asked where the scorpion was (sometimes it’s hard to tell when a two-year-old is telling the actual truth, or just telling us about some great fantasy he is currently living in – I mean, I *know* when he tells me that a giant monster truck got a fish out of our pond and a tow truck had to come rescue it that he’s telling me a little story…but when he tells us a scorpion and spider are fighting, the line between reality and fantasy is a little grayer…it’s certainly possible that a scorpion and spider were fighting in this house).  So Charles followed Jack to the scene of the Scorpion/Spider battle and there was, indeed, a scorpion (maybe the spider crawled off to die somewhere?).

YAY for Jack alerting us to the whereabouts of a scorpion. YAY for Jack for not touching it.  And YAY for ONE. MORE. SCORPION. GOING DOWN. 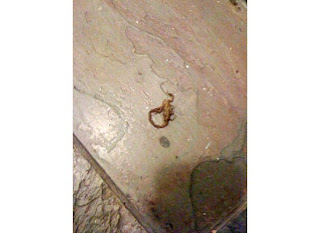