So I dashed to the counter and grabbed a wad of paper towels to pick it up with (going to flush that bad boy down the toilet) and when I turned around, he was nowhere to be seen.  I mean, NOWHERE.  Dude escaped.

Between Charles and I (mostly Charles), we put in about 30 minutes of serious scorpion-hunting, all to no avail.  I was getting more and more upset by the second.  Then I remembered that we had some spare Scorpion Traps laying around the house so I grabbed them, peeled off the sticky part and put them together (they are just sticky rodent traps that you fold into a little box and apparently scorpions are drawn to the dark space). 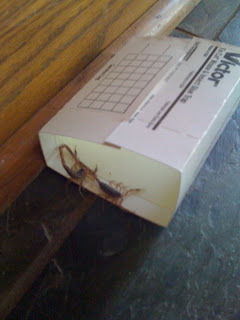