The good news is I am off the Whiney Train that I was riding last week, and now on board the Grateful Train!

All it took was a few sunny days and a break from handling bed time (thanks Charles)!

But today it’s cold and icy again, and we had to send the babysitter home as soon as she got here because we realized conditions were only getting worse and I didn’t want to be responsible for her sliding down the interstate in this awful ice.

So how does this result in a shout-out to single moms and everyone in Minnesota?

Well, I am far from a single mom.  I have Charles, who helps out a ton, and both my mother AND mother-in-law within a mile of our house.  So I have help.  And I still get overwhelmed!

Take today, for example.  We sent the babysitter home and because I have to work, took Jack to my mother-in-law’s house.  Which is great.  Except, of course, he needs to eat breakfast first, and then I have to find his jacket and hat (yes, it’s THAT cold – he needs a jacket and a hat just for the walk to the car) and round up some snacks that will hopefully help him to poop (yeah, you read that right – constipated toddler is NO FUN and a reality at this time).  So we drop him off, return home, work, and then have to go pick him up.  Which of course means he screams at me when I walk in because he doesn’t want to go, he pretends like he is still drinking his apple juice even though the cup is empty, he starts asking for more crackers, he says he doesn’t want to wear his jacket and then proceeds to actually prove this is true, he kicks off a shoe that must be returned to his foot…you get the idea.

It takes FOREVER to pick him up and return home, and we don’t even live a half mile away!

So while I am going through all of these motions, I am constantly thinking A) I am lucky to have in-laws down the street who can watch him while I have to work, and B) THANK GOD I DON’T HAVE TO GO THROUGH THIS EVERYDAY.  Because not only is it a hassle to just get him out of the house and into the car, but we still have to come home, change his diaper, and then convince him he actually needs to sleep before I can get back to work.

And I realize what a single working mom with a child in daycare has to endure on a daily basis.  And that is just the tippy tip of the iceberg – I have someone (Charles) who can watch Jack while I shower, let me sleep in on the weekends, take over the occasional bedtime so I can catch up on important things like Teen Mom 2 and Real Housewives of Beverly Hills, and even let me out of the house on the weekends so I can enjoy luxuries like hair appointments and pedicures.  I have it so damn good – even though I whine, I know how much harder it could be.

So – once again – shout-out to the Single Moms!!

And for the people in Minnesota (and anywhere else that is cold and has snow more than three days out of the year)…well, let’s just say I’ve officially realized I can never live in a cold climate.  I like it when it snows, I like to walk out in my boots and crunch around in the fresh snow and admire how beautiful it all looks and how muted everything sounds…but then the wind starts to hit my ears or my hands turn a little red from the chill and I am totally over it.  Completely, 100% over it and wishing it was hot outside.  And I haven’t even talked about the misery that is taking care of the hooved children in this weather.

It appears I have passed this trait on to my child, who covers his ears (and he is wearing a hat to begin with) and says “Windy! Windy! Go inside!” as the going gets tough.  I guess you can take me out of California but you can’t take California out of me.  Or my child, apparently.

So all of your in cold climates – you have my utmost respect and admiration. 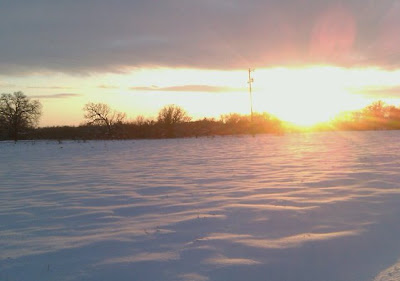 This is our front yard.  It looks (and feels) like a Snow Ocean.  Pretty is as pretty does!

« Scorpions and Spiders and Worms, Oh My!
Dah-ling I love you, but give me Park Avenue! »