I am preparing, both physically and mentally, for Norman’s impending departure.  He is scheduled to move on to his new home (and his new life) on or around April 10th.  He’s leaving behind the humid Texas summers and horseflies the size of golf balls for a green pasture in the mountains of Colorado.  He’ll be trading in the life of leisure for an actual job, leaving a family who loves him but doesn’t show it for a family who will not only love him but actually give him the attention he deserves.  All wonderful things and clearly in the best interest of the horse.

So why am I so bummed?

Well, in some ways I’m really not sad at all.  One less mouth to feed, one less critter to keep up with and budget for each month, one less being not getting the attention he deserves.  The thought of only having one horse (and two donkeys) is a little bit freeing.  It makes the one horse I will have seem more manageable…maybe (and we can blame this on my pregnancy-weakened brain), I will actually be able to ride again someday.  Right now I feel overwhelmed by the horses and almost like I wouldn’t know where to start if I all of a sudden got a wild hair and decided to go spend some time in the barn.  But if I only have one horse, I know exactly what I would do with an extra hour in the barn (I would wash Seamus’ tail…seriously…it’s nasty and hasn’t been washed in probably a year and a half).

I also know that this is really what is best for the horse.  A real job, a real family, a better location (he’s a draft horse and he does best when it’s comfortable to cold outside…he won’t have to sweat through any more summers).  Norman will have a better life in his new situation.

But I am still sad.

I first met him a few hours after he was born (my mom’s PMU rescue mare gave birth to him in May of 2006).  A gangly colt with none of his mother’s shyness.  His belly still wet, he let us all love on him from the beginning. 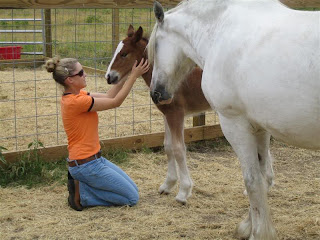 He wasn’t always perfect.  He turned out to be a complete nightmare for the vet.  It took four of us to hold him so the vet could sedate him to be gelded.  He then of course remembered this and reenacted the scene for subsequent vet visits.  But this kind of brings me to what prompted this post…I had to have the vet out on Friday to get Norm’s paperwork up to date for his trailer ride to Colorado and guess what?  He stood like a perfect gentleman.

Oh…he eyeballed the vet alright.  But that was it.  He didn’t move a muscle while he received two shots and had his blood drawn.  The vet, shocked, commented on how the draft horse in him had finally overtaken the “baby” part of him and how she couldn’t wait to go back and tell one of the helpers who had dealt with him at that first vet visit.  And it’s not just the vet…he’s never been nasty for the farrier but I would hardly call him “easy” – until the last time, when he pretty much stayed in one spot the entire time he had his feet done and refrained from trying to remove the farrier’s hat even once with his giant draft horse lips.  He’s turning into a big boy, a grown-up – a mature, sensible, easy horse.

So I wonder, often, if my future daughter will see pictures of him and say, “MOM!  Why did you get rid of him?!”  Because I remember giving my mom a hard time because she didn’t save her “cool” bell bottoms and shoes that I saw in pictures and wanted to wear in high school – and those aren’t nearly as cool as a big, beautiful horse.  But then I also realize that if this little girl does like horses, and does want to ride…I really hope to be in a place where we can get her one.  And then I realize how much I hope she *does* like horses…

Having a child is kind of like living a great science experiment every day.  Before Jack was born, we wondered what he would look like.  Would he look like me?  Charles?  A combination of the two? (Charles, in case you are wondering).  Would he like horses? Golf? Guitars? You know – things he should be genetically-inclined to like.

Well, so far he is ambivalent about the horses.  I ask him if he wants to ride and he says yes, but after a couple of circles on Norman’s back he’s over it and wants down.  He has important things to do that don’t involve horses – like digging in the dirt and pretending to fill his car up with gas.

He likes golf – that is for sure.  We just bought him a new set of plastic clubs that he can play with (so far he seems to hit left-handed, and his Walmart clubs just weren’t helping his swing any…hehe!).  He has, on two separate occasions, played nine holes of golf with Charles (I use the term “played nine holes” very loosely…imagine, if you will, a two-year old on a golf course and you can surely imagine how much actual golfing took place…but since he will only last about five minutes on a horse I would say it counts for something that he can spend almost two hours on the golf course).  So we know Jack likes golf.

Only time will tell if this little girl will be content to spend a couple of hours with me at the barn…I guess we will have to wait and see.  There’s just no way to know until that time comes.  I am not lost on the irony of rehoming Norman so we can have more time and money for the kids, one of which very well might be asking for a horse just like Norman a few years down the road.  But for now…I’m going to enjoy my last week with Norman AND enjoy my freshly-cleaned tack room, which has a whole lotta less junk now that I am down to one smallish pony!

« Dah-ling I love you, but give me Park Avenue!
Ding Ding! Rounnnnnd Two! »