You know what I did differently this year?

I did my kids’ Valentines early. Instead of rushing to Target at 7PM on February 13th and elbowing through crowds of crabby parents looking for the last box of Star Wars Valentines because apparently none of us could be bothered to pick up a box of Valentines during one of the previous 32 trips to Target I *know* we had all made in the last three weeks, I did mine ahead. Way ahead.

I love the way these LEGO movie Valentines turned out! And I made a free Lego Valentine printable for you, HOLLA! 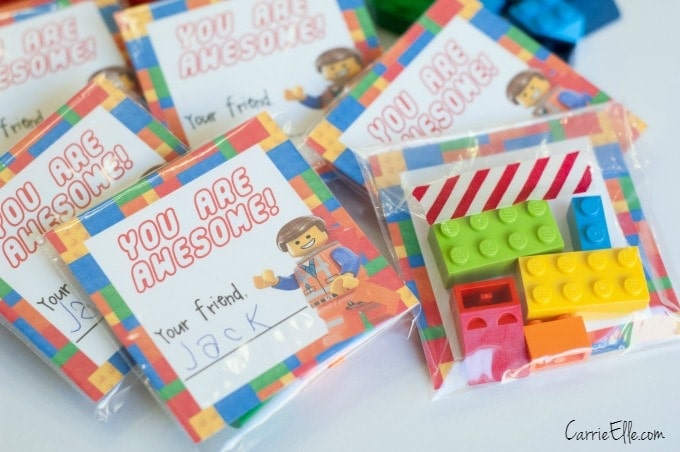 These were really easy. Unlike other “DIY” Valentines that require things like tricky cutting and gluing and glitter (not that I don’t love glitter…!!!), I made these as simple as possible. Because there is nothing more annoying than a printable with weird edges that you need to cut out. Also, I wanted to make sure this was something the kids could actually help with, because the idea of making all the Valentines for both kids?

Ain’t nobody got time for that, y’all!

But if you do end up making them all yourself, have no fear. I promise these are simple. In fact, after I did a few, I put the six-year-old to work and made him do the rest (it’s his party, right?!).

Here’s what you need to make these:

I bought this Lego set on Amazon. There were enough to create 20 Valentines, with each kid receiving a red, orange, yellow, blue and green lego.

Have your kid write their name on the Valentines, cut them out, stick them in a baggie, add some Legos (I was pretty methodical about making sure each kid got the same colors, because…kindergartners!), and seal with a piece of washi tape.

You can download Side A (the side with Emmet) here.

You can download Side B (the side with just the Lego frame) here.

I’m feeling pretty on top of things today…it’s not often (if EVER!) that I A) have the energy to make our own Valentines for the kids, and B) actually make them (I make all kinds of awesome stuff in my head…but it’s kind of a miracle when any of it comes to fruition).

I hope you (and your kids) love these DIY Lego Movie Valentines as much as Jack does!

These are great! You’ve inspired me again, Carrie! My little guy will totally dig this idea. 🙂

Aubrey, my kids LOVE these…they want me to let them play with them and I keep having to tell them they’re for Valentine’s Day! They just turned out so cute!

Lila JUST started loving legos and I showed her this…she was amazed! Pinned and totally doing this!

Both of my kids love Legos. Be sure to check out the Lego Friends series…they have some Disney Princess Lego sets (if she likes Princess Legos!).

This is, no doubt, the cutest Valentine’s I’ve seen! I love the no candy ones because you know they get enough of it already, right?

Thank you Lara! OMG…the candy! They get so much…and I end up eating it all!

LOVE these! Shared on my Facebook page and pinned 🙂

What a great idea! Thanks for sharing these at the Crafty & Delicious Party. 🙂 Have a great day!

Picked up a basic Lego set to do this with my 9 year old! He’s also going to make a Lego Valentine’s box.

Ooooh I love the idea of a Lego box for Valentines…that will be super cute!

My boys would love these! Such a cute idea!

Jack is super excited to pass them out on Friday!

Super creative! My kids would be stoked to get this Valentine! Pinning!

Super cute and creative! I love this idea!

This is so awesome! Pinned and tweeted. Thanks for sharing this at our party! I always love your amazing creations. I hope to see you next Monday because we love to party with you! Happy Tuesday! Lou Lou Girls

Awe so cute, I will have to remember this for next year

This is so cute!

I’m so wanting to do this for my boys Valentines party. I can’t seem to find the link for the legos. Could you proved the link?

Hi Joanne! It looks like the one I bought has been discontinued. This looks like a good option (you might get two if you want to use bigger pieces): http://amzn.to/2ifNElj

What a fun (and non-candy) Valentine’s idea. I know my son would have loved this when he was younger. Thanks for sharing at the #ThisIsHowWeRoll Link party.

These are so cute! We took our nieces and nephew to the movie when it came out and all we could sing was, “everything is awesome” for the rest of the day 😉 Thank you for sharing these with us at Funtastic Friday!

Thank you so much for making this so easy! We ended up ordering some lego rubber bracelets off of Amazon and are planning to include them in a bag or tape them on the card. So much better than rushing to the store and way cuter too! 🙂