I talk a lot about the walks I go on and I realized these last few days that it’s very possible my walks down these country roads might come to an end sooner than I had thought.

For one thing, it’s getting hot (“hot” means 85 degrees to this perpetually overheated pregnant lady).  I don’t know how much longer the decent weather will hold out, and I can tell you for sure that I won’t be traipsing around in 95 degree weather down a hot stinky road (yeah, the parts of the road that are actually paved reek of melted asphalt when it gets hot) dodging grasshoppers and snakes when I am nine months pregnant.  It’s possible that we might sell our house soon and by the time I am ready to start walking again, we will no longer be here and I’ll instead be walking down sidewalks and under streetlamps rather than down dirt roads and under oak trees.

This past week has been especially beautiful.  75 degrees, breezy, blue skies.  The kind of weather that reminds me of California.  So I decided to take my camera and capture my walk (camera = iPhone that crashes constantly and had a dirty lense which resulted in much frustration on my part and blurry pictures, to boot).  I had planned on editing the pictures in my favorite iPhone app – Instagram – and making them all pretty and bright so my walk would look *extra* exciting, but that was not meant to be.  My phone is two years old and apparently the bug that Apple implants in all phones to self-destruct when they turn two years old so their owners will be required to buy a new one has been activated.  So, no fancy Instagram pictures to make my walk look better than it really is.  Just the real deal.

Here it is, from start to finish (minus my panting and wheezing self, of course).

This is my driveway (well, actually I was about a 1/4 of the way down it already).  It bears noting that it takes me like ten minutes to walk down the driveway and get the mail.  Much, much longer if I take Jack.  The little brown head in this picture is Janga, my trusty walking buddy (mostly trusty…I enjoy her company until we see a rabbit or something else of that nature and she tries to pull me off my feet to get it – amazing how much torque a 55-pound pitbull with a bunny or squirrel in her sights can produce!). 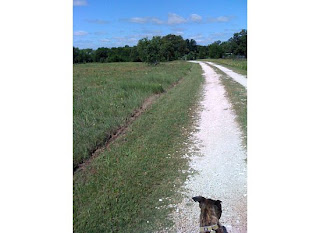 This is a part of the road we walk down.  Most of it looks a lot like this.  This is all very nice when it’s shady and cool.  Not so nice when the sun is directly overhead.  The little black blob in this picture (and probably a few more to come) is Cricket.  Cricket was a “dump dog” – when we first moved out here someone dumped an emaciated mother dog and her ten mange-ridden, hairless puppies (TEN!!!) and we rescued them.  Hundreds of dollars later the dogs were well and we found them all homes.  We kept Cricket, but a couple of years ago she deserted us to go live with the neighbors who let her sleep on the couch and feed her sandwiches.  So I really don’t consider her “our” dog anymore, but she does occasionally join us on our walks. 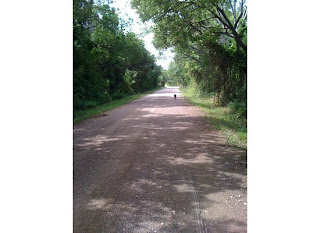 I kind of feel like I might see a leprechaun running through this pasture when I pass it.  That would be neat. 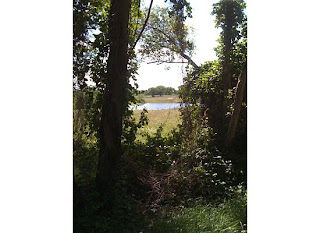 Another potential leprechaun hiding place.  If leprechauns lived in Texas, that is. 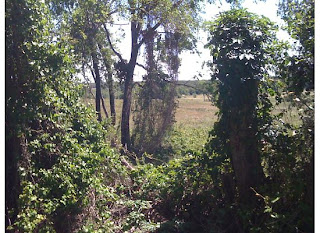 I love this pasture.  I walk past a ton of trees and there is suddenly this little opening in the trees and I get to see this pretty picture.  There are some really nice horses who live here and enjoy it as well.  The other day they were down by the fence so I picked my way through the brambles to go over and visit with them.  They are actually pretty fancy and nice to look at, and within seconds all seven of them were pushing up against the fence to get scratches.  This was all fine and dandy until one particularly pretty palomino mare decided to start kicking the tar out of everyone around her (as in, making some serious contact) and they all started tripping over each other and trampling each other trying to get away from Evil Mare.  A few of them of course went into the fence (barbed wire) and I thought, “Oh, shit, this is what I get for trying to visit with the pretty horsies!” and I pulled Janga away from the fence.  As I looked down I realized I was standing in a bunch of suspicious-looking green plants that immediately brought to mind the trailriders/hikers mantra, “Leaves of Three, Let it Be” and again thought, “Oh, shit, am I stepping in Poison Ivy?????”  It all turned out ok.  Horses returned to grazing peacefully and I, as of today, do not have any weird/itchy rashes on my legs.  Yay. 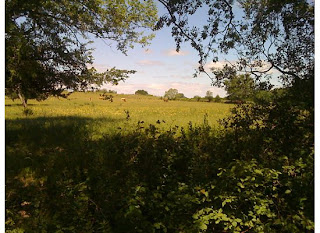 Lots of sky and pretty clouds blowing in the breeze this particular day.  As Jack noted, “Clouds are movin’, Mama!” 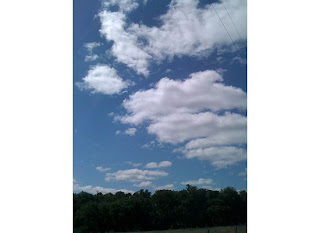 This lovely landmark tells me I am about 1/4 of the way done with my walk.  And also reminds me that I do, indeed, live in rural Texas.  This has been there for about 6 months now.  I was hoping to see how long it would take to biodegrade.  In case you can’t make it out, it’s an empty case of Coors Light on a reflector.  Nice, right?? 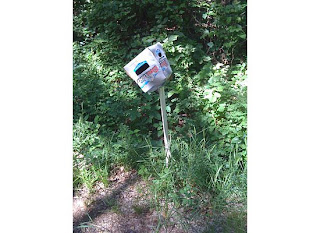 This fellow poked his head out of the bushes and surprised me about halfway through my walk.  He had a harem of lovely ladies laying at his feet, actually.  They were enjoying the nice day as well. 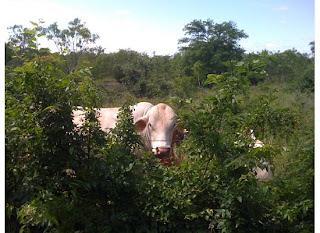 I think the lense was foggy (hence the weird blue streaks) but I wanted to include this one anyway because this road (which I never take, too creepy and isolated to walk by myself) has great memories for me.  I used to ride down it (feels much safer on a horse) and one day when I was pregnant with Jack (in the late summer), Charles and I walked down it and saw, literally, hundreds of fireflies flashing all around us.  I have never seen anything like it since. 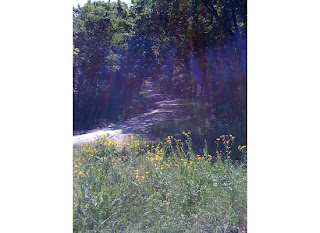 Thistle!!  You know, like Eeyore eats!  I don’t think I had ever touched thistle before.  I expected it to be…prickly, I guess?  It wasn’t.  It was soft and I was tempted to bring some back to see if the donkeys would eat it.  But then I would have had to carry it for 30 minutes and that did not appeal to me (I have, on occasion, brought “treasures” back to Jack – a golf ball once, and an actual heavy metal hook another time…hmmm…maybe I need a fanny pack.  Ha!). 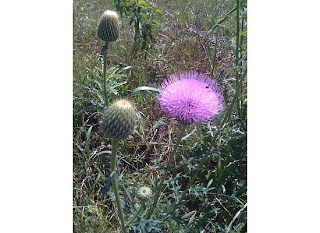 Sorry, snake-phobes.  But this is a daily part of my walks.  Today, the little bugger was dead.  The previous day?  Not so much.  It is kind of sad, these are harmless snakes, but I really, really, REALLY don’t like putting my foot down and noticing a half-second too late that I am about to step on a snake…harmless or not. 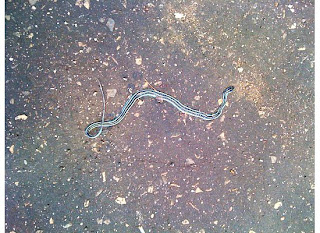 Trotting along, on high alert for squirrel sightings. 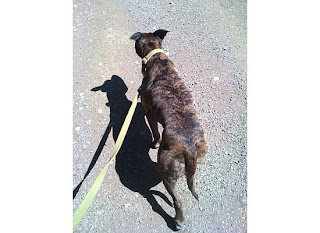 This is our driveway again, from the other end.  The homestretch!  Cricket is patiently waiting for us.  I am reluctant to leave the shade (seriously…it was 75 degrees out but my pregnant-self feels about 10 degrees warmer and I was sweating at this point). 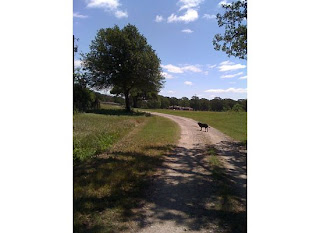 So there you have it, my friends.  I am sorry to not have more wildlife pictures for you (one of the reasons I wanted to take the camera that day was because I had come across armadillos, a skunk, several snakes and a pasture full of llamas in the last week and thought surely I would run into more of the same on this beautiful day, but I guess they were all in hiding).

It is a beautiful place, most of the time, and I will miss it.  Please remind me I said that in about, oh, two weeks when it’s 90 degrees outside and I can’t even make it down the driveway!