OK, I am kind of being silly with the title of this post because I actually love my job and don’t feel like I really owe my soul to the company store (don’t know what I’m talking about or think I am not making sense as usual??  Hehe…I’m talking about the song “Sixteen Tons” which I have been singing to myself since second grade, when someone lip-synced to it for the Talent Show).  But I turned 33 (33!!) yesterday and truth be told, I am a year older and deeper in debt than I was last year – which is why “Sixteen Tons” is haunting me right now…

A year ago we actually weren’t in debt, aside from a car payment and a house payment (which, I realize, are technically debt).  And I was a year younger (imagine that – a year younger and not in debt).  But then we decided we were going to sell our house (honey I love you, but give me 5th avenue!).  Well, selling a  house isn’t as simple as just listing it on the internet.  Maybe it was at one time – like spring of 2004 when we sold our California condo in one day after listing one ad in the paper – but this is Texas in 2010.  Ain’t that easy anymore.  In order to sell our house, we had to fix our house.  Hence the debt part.  A lot of debt.

Without boring you with all of the details and setbacks, it is safe to say that I thought this place would *NEVER* be up for sale.  So imagine my shock as I pulled up to our house on Wednesday and saw it – like a golden beacon of light in a dark night on a country road with no streetlights (that would be *my* street) – a FOR SALE sign right next to our mailbox!!  A little early birthday surprise, you could call it.

When I think of this past year, the main themes that pop into my head are: house, baby who is no longer a baby, work, debt, weight (as in, not being able to lose any), and wanting to move (not in that particular order – I would have to say “baby” would come first if I were to list them in order of relevance).  When I read back over those themes, I think, “wow – how boring am I!?”  What happened to the old me, who would have thought of things like husband, horses, travel, books, and wine if I were asked for that same list three yers ago?  I guess I know the anwer to that – that old me became a parent (and got a few years older).

I guess I have realized that when you have a kid – and when you get older – your priorities shift.  I am no longer the priority.  My priority now is my child.  And when I think of him, I think, “OK, we need to move so he can have friends and we can be closer to Dallas so Charles doesn’t have an hour commute each way and I can eventually stay at home which means we need a cheaper house in a new location which means we must sell this house which means we must fix it which means we must spend a lot of money to make it perfect first which means we must work lots of hours and take out lots of loans and wow wouldn’t it be nice to ride a horse or lose these ten pounds I can’t get rid of?”  So, in a nutshell, that explains my thought process for the last 365 days or so.

Of course, there are other things – physical things – that signal I am getting older and am also a parent.  It’s not all just boring and responsible thoughts!  Other fun things remind me of my age, like buying a pair of pants that said “tummy control” on the label and being secretly grateful they exist (although this did send me shooting back in time to a day that I remember very clearly – I was 15 and at a horsehow in Sacramento – and my friend Valerie and I were relentlessly picking on our mothers because we discovered they were wearing elastic-waistband shorts…now I’m like, “bring ’em on!”).  My hair has lost its bounce and curl thanks to post-pregnancy hormones that are haunting me two years later, my old bras are stuffed in a drawer somewhere in the off-chance I may – someday – wear them again, my knees hurt if they are bent for too long and I take awhile to straighten up if I’ve been sitting on the floor for any length of time (you know, like for five minutes or longer).

I’m sure some of this is to blame on poor eating habits and no exercise.  But still – it kinda sucks!

The good thing is, at least for the part about being boring and in debt, I think this is really just a season in my life.  I hope, when I turn 34 and reflect on this coming year, that I won’t be in debt and that I may actually have been on a horse again.  I hope we have moved and Jack has some little friends (not to mention, I hope I have some friends!).

And if not – well, the only important thing is that we are happy and healthy, and despite all of my whining, we have those two things covered.  And for that, I am very, very grateful.  I may be another year older and deeper in debt, but I owe my soul to whoever it is out there that has hooked us up with happiness and health. 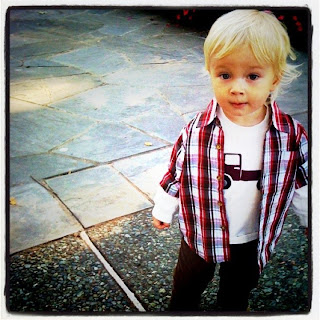 Jack – the one I would wear tummy control pants for every day if I had to!  🙂
﻿
Pin
Share
Tweet
Buffer
0 Shares